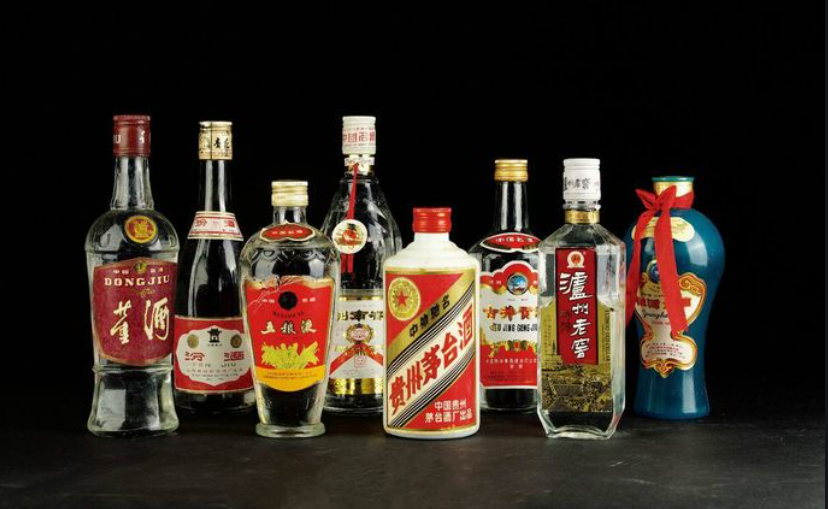 The top 5 white liquor manufacturers shared similar trend in revenue growth with a sharp decline from 2011 and toughed in 2014 due to industry distress. Revenue growth started to slow down again from 2017 as the whole industry loses momentum in recent years. The latest growth rebound was due to the market consolidation and release of pent-up demand in COVID-19. The third quarter is also a traditional peak season with two festivals (more banquet and social gifting). Moutai’s edge in branding power helps it secured steady and positive growth, even during the industry distress and COVID-19. Wuliangye also achieved steady growth in recent years via its reform and active control in pricing and distribution. Yanghe’s negative growth in 2019 was due to company’s restructuring measure and recovery trend is witnessed in 3Q20. Looking ahead, revenue growth for Moutai and Wuliangye tend to be more stable given their large in size and established base while Luzhou Laojiao, Shanxi Fenjiu and Yanghe may enjoy higher but uncertain growth under their expansionary strategy. 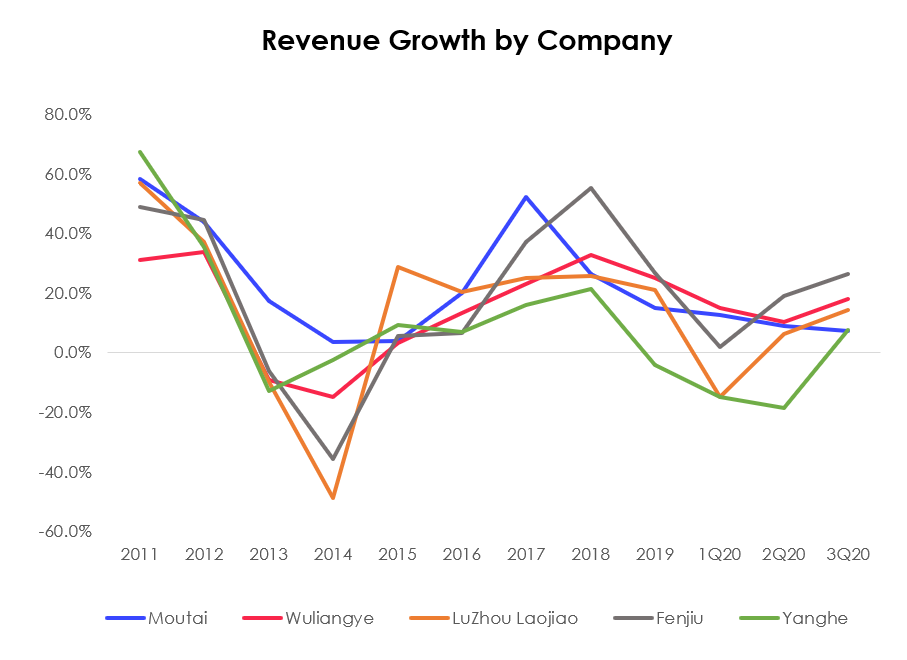 Moutai is no doubt the most profitable company amongst the top 5 high-end white liquor manufacturers with gross margin consistently over 90%. Moutai’s measure to increase direct sales potion will enable an upward trend on gross margin but could be offset by the higher growth of lower margin product. Margin expansion trend is also witnessed on Wuliangye, Luzhou Laojiao, Fenjiu and Yanghe as their higher-end products account for higher percentage in revenue mix under their premiumization/pricing-up strategy. Luzhou Laojiao could enjoyed larger increase due to its relatively much lower percentage earnings from premium product. 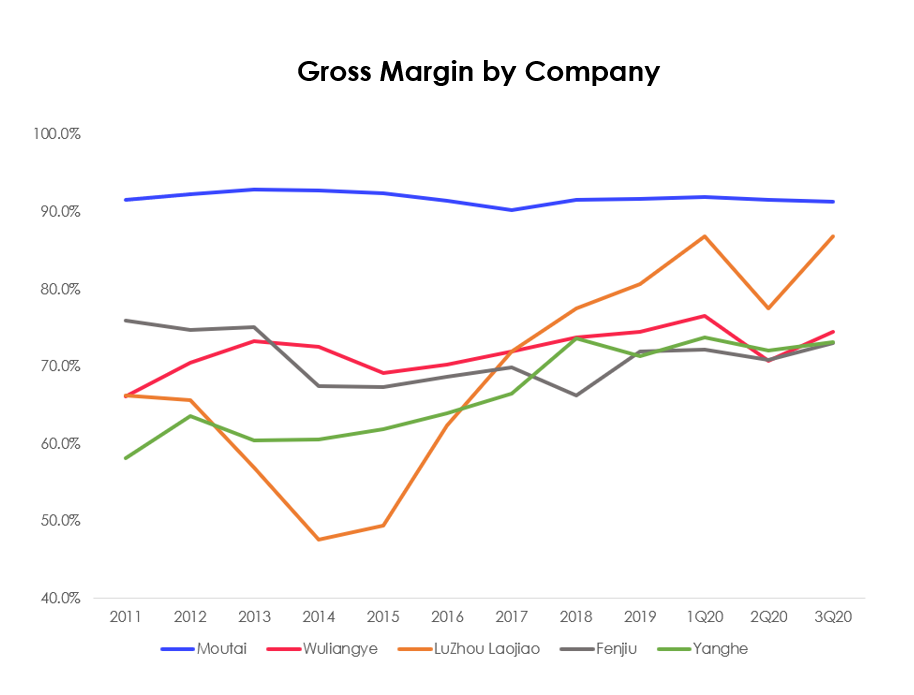 Outside In: Slopping Down Industry with Market Consolidation

From an outside in perspective, white liquor industry is a slopping down market in mature stage. The raising health consciousness will continuously decline the sales volume of white liquor. Hence, Market consolidation is the current main theme and industry leaders will benefit from the increasing market share. Nonetheless, the growth rate of the segment combines high-end and sub-high-end has declined from 37% in 2017 to 22% in 2019. The growth rate of average high-end white liquor price also has declined to 6% in 2019, from 13% in 2018. The future investment thesis over white liquor industry will lean toward the growth certainty in the longer-term and growth potential brought by pricing-up and scaling-up in mid to short-term. Despite the slower growth rate, an investment in white liquor is supported by much higher gross margins compared to other industries. 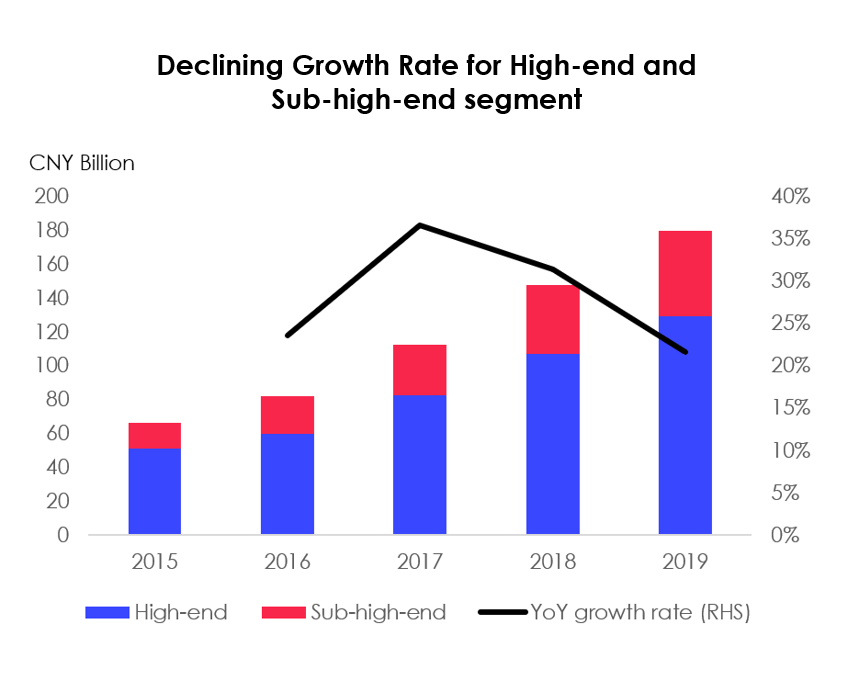 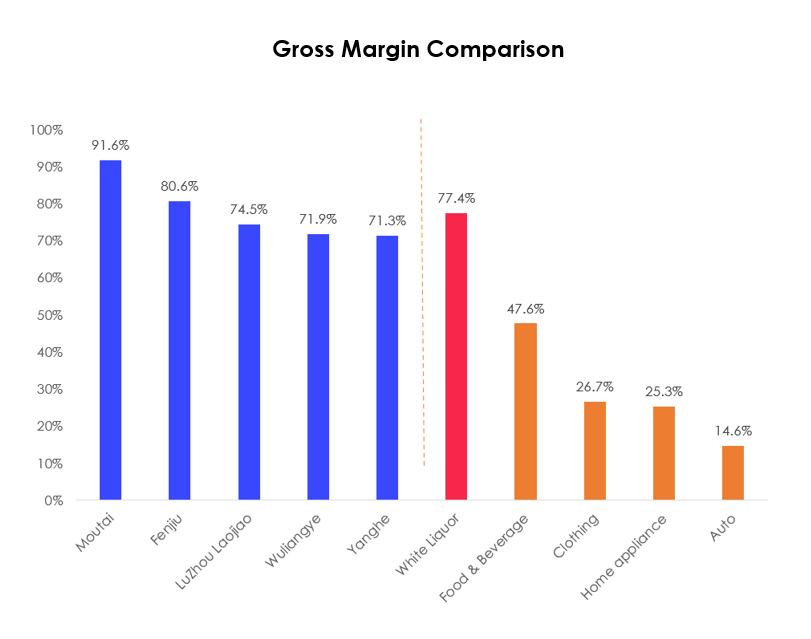 From an inside out perspective, Moutai is more likely to experience a slowdown growth earlier than its competitors due to the large in size, smaller rate/potential of price increase and higher base. However, such disadvantage will be compensated by its stronger than peers profitability and excess demand as industry leader. A continuous growth certainty in the longer future could be expected for Moutai. Meanwhile, we believe Wuliangye and Luzhou Laojiao could enjoy spill-out effect from the unfulfilled demand for Moutai. Luzhou Laojiao’s higher potential in margin expansion makes it more attractive than Wuliangye. For the lower-tier brands, Shanxi Fenjiu and Yanghe are more likely deliver higher growth as they penetrate the nationwide market, but the execution risk remains.

In summary, we expect Moutai to maintain its leadership amid the market consolidation in the next few years as long as it remains as the “King of White Liquor”. Moutai’s reputation and highest profitability among peers will secure its earnings certainty in the long term. An investment in Moutai will be the most defensive play and upside potential lies mainly on the increase of direct sales. Luzhou Laojiao’s investment thesis focused on the margin expansion from increasing mix of its high-end product while there is uncertainty in whether the high growth could be sustained after cutting selling and marketing costs. An investment in Yanghe or Shanxi Fenjiu would be exploring their growth potential. Yanghe’s recovery story is attractive but whether Yanghe’s growth could be recovered to a sustainable two digits with its restructure in 2019 and launch of new product would be the determining factor. Finally, Wuliangye could be the second Moutai but its distribution dynamic requires a close watch.