Hope all is well in the month of September,

Last month we wrote more in depth about our view regarding the fundamental causes of inflation.

This month we continued to see global inflation running above expectations as August CPI in US came in at +8.3%, defying the notion of “peak inflation” and possible earlier Fed pivot. This gave support for the additional +75 bps rate hike on the 21st of September, but the pace of the QT was unchanged as per previous announcement in May 2022. Thereafter, we saw a further steepening of the inverted yield 2–10-year yields curve in the US, as short-term rates hikes rose, while longer term yields remained steady. This increase in yield inversion, reflects the markets expectations on a coming recession in the year ahead. The same inverted yield curves were later also observed in Sweden, UK, New Zealand among others as more mature markets are facing similar pressures as monetary tightening still lags run rate inflation. Additionally, following the announced tax cuts in the UK, we saw a rare combination in developed markets of both a decline in the UK pound and an increase in long term yields at the same time. This shows continued market concerns that further fiscal stimulus might not yield the desired demand effects but further increase inflationary / devaluation pressures. Current 10-year bond yields are still well below current inflationary pressures and might continue to trend higher in Europe, where the energy crises are more severe, especially in Germany where PPI increased to +45.8%.

Going forward, we should expect to see further rate hikes and steepening of the yield curve inversions, implying an increased likelihood of economic recessions going into next year. In this environment, it will also be highly important for central banks to anchor longer term inflation expectations and ensure financial market stability. However, this might be challenged as market participants continues to evaluate policymakers actions vs  incoming economic data. 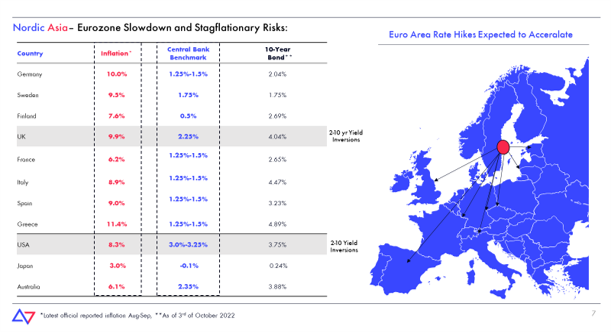 Domestically, contrary to the high inflationary environment globally, CPI in China came in at 2.5% in for the month of August while PPI came in at 2.3% below expectations. Retail sales growth came in at +5.4%, while F&B catering revenues grew +8.4% in August, marking the highest level of YoY growth rate this year since the Covid-19 lockdown in Q2. Overall foot traffic activity within major cities remained stable and slight uptick towards end of month, but domestic flights declined slightly in September due to localized Covid-19 outbreaks in Chengdu, Guizhou, Hainan. Export sector is showing trending weakness as overseas clients are more cautious of the current uncertain demand outlook. Composite PMI for the month of September came in at slightly weaker at 53 vs 54 in August while service PMI came in at 55 vs 55.5 the month prior. Towards the end of the September, further stabilizing measure to ensure delivery of unfinished projects and lower mortgage rates helped to support an increased activity in the domestic real estate market sales. Sales of new properties in total sqm were especially strong in tier 2 cities. Other leading consumption indicators and offline retail proxy measures showed slight weakness in the beginning of September but rebounded well towards the end of month. In general, domestic retail sales in September should continue to show a continued year-on-year improvement. 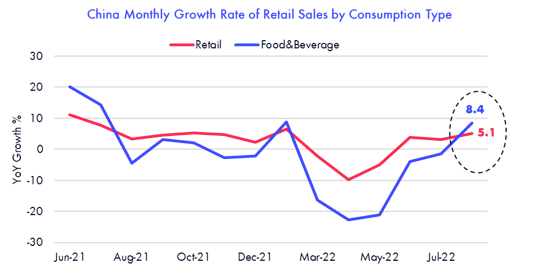 During the month HK finally lifted the quarantine measures as of 26th of September with support from the domestic policy ministers of HK affairs in China. Foot traffic in HK is gradually normalizing and since the lifting the quarantine measures, and a surge in flight bookings on both Cathay pacific and HK express caused their homepages to crash temporarily as pent up demand for overseas travels from local HK residents finally was  released.

As mentioned last month, current economic growth rate in China is below its targeted growth range to achieve it's the mid-term goal and therefore policymakers are pressured to strike an adequate balance of economic growth and pandemic controls.

Going forward, as the export sector is expected to slowdown further, this will put more pressure on policymakers to stimulate the domestic demand going into Q4 and next year. In this context, policymakers have the option to gradually adjust the current Covid-19 policy in the year ahead to drive domestic consumption and service sector growth. Therefore, in the upcoming 20th National Congress as new economic policies will be formulated for the upcoming mandate period, further adjustments to the current epidemic prevention and control policies and the country's positioning of real estate in economic activities will become the largest variables in driving the domestic economic activities ahead.

When further clarity on those two variables above is given and new policies are put in motion then the domestic market in China might become one of the few major economies with positive real economic growth in the year 2023. Valuation multiples are attractive at current levels in China and especially in the HK market. Therefore, with further policy clarity and improving domestic economic fundamentals, we would expect more investors to increase their allocation to this sector as part of their sector rotation strategy for next year.

Looking ahead, in this continued complex market environment, risk of further slowdown or even stagflation environment abroad might be increasing, while the Chinese domestic market with stable inflationary environment and demand recovery is on a contrary improving trend. Therefore, going into Q4 and 2023, despite a slowing external outlook, we’ve continued to re-invest in our portfolio companies which despite Covid-19 have expanded their user base / sales channels and are well positioned to capture a fruitful rebound of the Chinese domestic consumption market in the year ahead.

Many thanks again for your partnership and support in Nordic Asia as always,

Please see below for more specific selected portfolio company additions in the month of September.

Yining, Jason and the NA Team in Stockholm & Shanghai 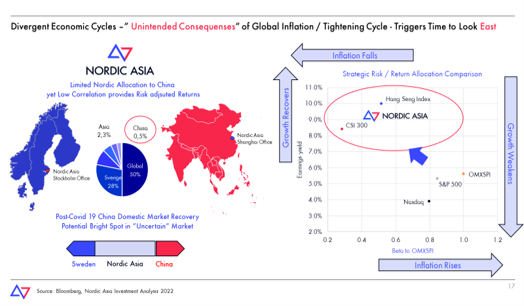 Shenzhen Inovance, is a domestic industrial automation systems supplier to meet the growing need of domestic manufacturing efficiency upgrade, automation and import substitution in this sector. The company focuses on the core technologies of "information layer, control layer, driver layer, execution layer and sensing layer", and is in a leading position of industrial automation control products. The company's products cover not only automation components such as inverters and servos, but also integrated products such as industrial robots. These products are widely used in many different industries such as for high-end manufacturing, automotive industry and electric vehicle motor controls. Industrial automation in China has developed rapidly. According to MIR Databank, sales of industrial robots, the main integrated products of automation, increased by nearly 50% YoY in 2021. Even in 2022, which is severely affected by the Covid 19 and economic recession, the YoY growth rate is expected to reach double digits. China's industrial automation industry will maintain a high growth rate in the future due to efficiency needs and raising domestic wage growth.

China manufacturing shift towards industrial automation to improve efficiency and quality in its high-end manufacturing sector is a given trend. In this market, Inovance has already established itself as a key domestic brand with first-mover advantage, high barriers to entry and solid customer base. With the continued development of China's industrial automation market and need to increase efficiency, we believe Inovance is well positioned to capture the growth of this domestic market ahead. 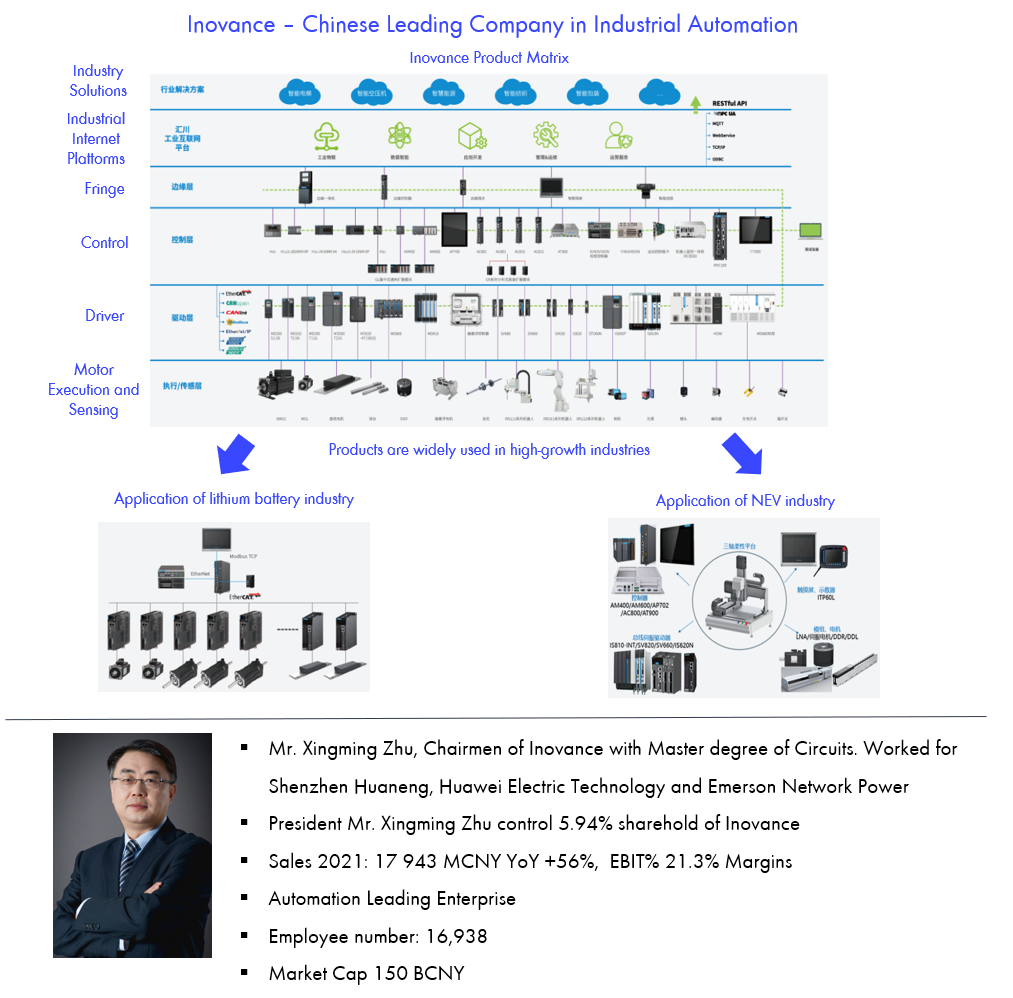 Chow Tai Fook (CTF) is the largest domestic jewelry retailer in China founded in 1929. CTF’s market share was 7.6% in 2020. As of 30 Jun 2022, it has over 5,931 POS in total which majorly located in mainly China. Since FY19, CTF has been rapidly expanding POS network in Mainland China, recording a net addition of 543/710/743/1,312 during FY19/20/21/22 respectively. Its store expansion pace has been much faster than major peers thanks to its better branding power in gold jewelry and asset-light franchise model. CTF targets ~1,000 net stores addition in FY23 in Mainland China; most of these new stores will target lower-tier cities and through a franchise model.

CTF enjoys superior brand equity vs. domestic peers in the mid-to-high end jewelry segment while taking a differentiated pricing/product position to avoid direct competition with international luxury brands. In the recent years, CTF exploited the consolidating trend of China’s jewelry market, which still highly fragmented. Top 5 brands’ combined market share increased from 14% in 2016 to 21% in 2020. With growing disposable income, Chinese jewelry consumers are turning more focused on brand equity than before which also benefited chained stores like CTF vs. those white brands. CTF hence proactively initiated its nationwide/lower-tier expansion since FY19 which helped by scale effect and COVID-19 disruption, i.e. exit of smaller players. The wide adoption of franchise model also enabled faster expansion with rapid POS establishment without heavy investment. In support of the rapid POS expansion under franchise model, CTF also adopts consignment model (2/3 of its wholesale revenue) to ease franchisees’ burden where CTF takes ownership of inventory before the products are delivered to consumers.

CTF also values its brand equity by product design improvement and solid management. CTF seized the opportunity of a rising consumer interest in traditional Chinese culture by launching the HUA collection in FY19, which has turned out to be a huge success along with the “Guochao” fashion trend. CTF also utilized its rich industry know-how through long history of retail operation to support its franchisees in their store management. All CTF’s stores are connected to its proprietary digital store management system which gives the group access to all the store level data and enables systematic management of the whole network.

We believe that CTF is well positioned to keep gaining market share in China by its strong branding power, leadership in the product design, expanding POS network under asset-light model and digitalized store management system. We like CTF’s ability to seize new growth opportunities in a fast-changing industry environment and strong track record. We expect CTF to benefit from an gradual improvement in offline retail foot traffic and same stores sales growth to rebound as Covid-19 dynamic zero policy and offline traffic normalizes in the period ahead. 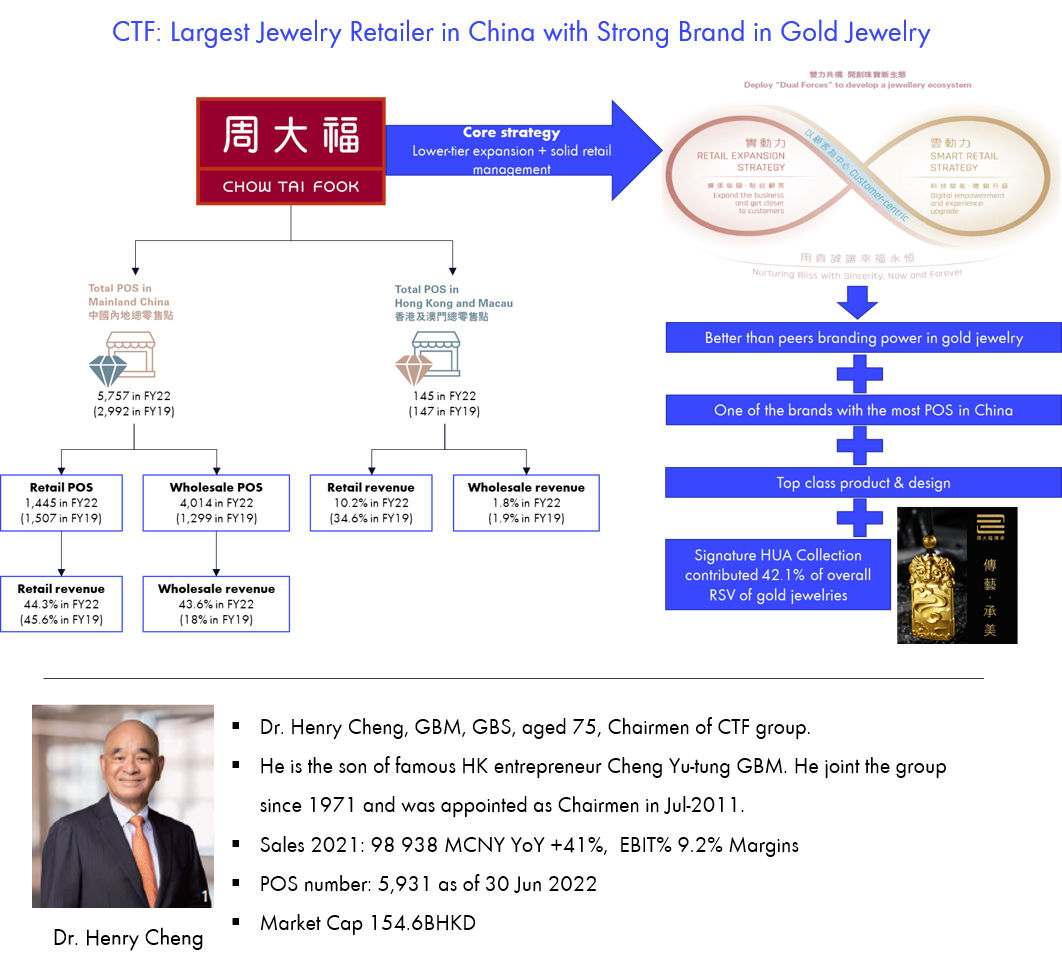 This e-mail is for marketing purposes only and does not constitute financial advice to buy or sell any financial instrument. This e-mail and the documents within may not be distributed further and is only for people and companies' resident in the European Union, the EES and Switzerland. This e-mail is therefore not intended for any person or company resident in the United States, Canada, Japan or Australia or in any other country in which the publication of this material is forbidden. If the laws and regulations is as described above, the reader is then prohibited to take part of this –mail. In accessing this e-mail the reader confirms that he or she is aware of the circumstances and requirements that exist in respect of accessing this e-mail and that these have not been violated. Nordic Asia disclaims any responsibility for any typos and do not guarantee the validity in the information and documents in this mail including typos, corrupt e-mails and/or for actions taken as a result of the mail and/or the documents within. All investments is always attached to a risk and every decision is taken independently and on their own responsibility. The information is this mail is not intended to be used instead of the professional financial advises as the individual receiver might need. There is no guarantees that the Company will fulfil its obligations under the loan financing which is referred to in this e-mail. Any funds invested may be lost.