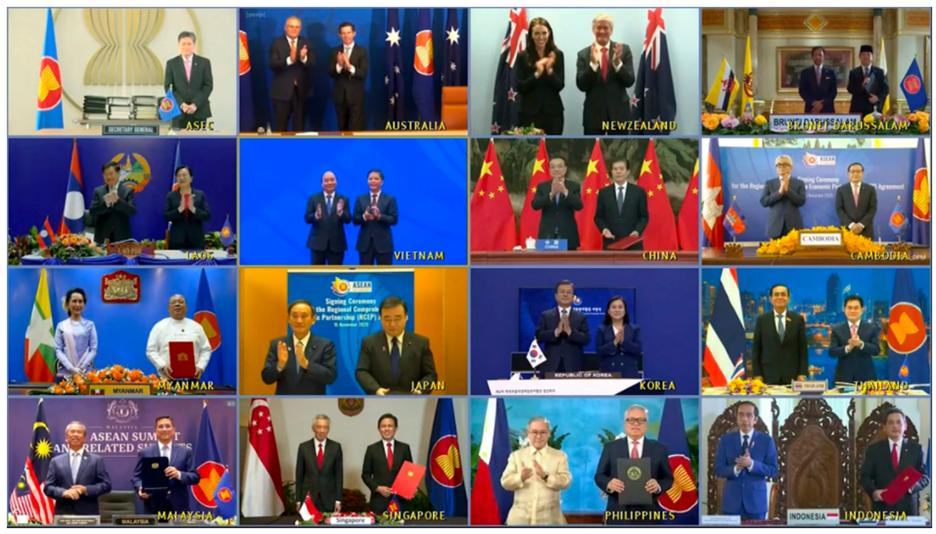 The Regional Comprehensive Economic Partnership (RCEP) is a groundbreaking free trade agreement that was signed on 15 November 2020 between 15 Asia Pacific countries consisting of the 10 ASEAN countries as well as China, Japan, South Korea, Australia, and New Zeeland on 15 November 2020. After eight years of negotiations it has become the world’s largest free trade agreement consisting of more than 2 billion people and around 30% of the world’s GDP. Similar to other free trade agreements, RCEP aims to lower tariffs, promote investments, and increase the trade of goods and services between member countries.It is estimated that RCEP will eliminate about 90% of tariffs over a period of 20 years.

Economic and population data of the RCEP member countries

The total GDP of RCEP’s 15 countries amounts to USD 25.4 trillion which corresponds to around 30% of global GDP. These include China, the world’s second largest economy and Japan, the world’s third largest economy. China and Japan alone make up around 75% of RCEP GDP and more than 20% of Global GDP. RCEP will be a diversified and dynamic free trade area with member countries ranging from developed OECD nations such as Japan, South Korea, Australia, Singapore, and New Zeeland to population rich fast growing countries such as Indonesia, Philippines, and Vietnam.

RCEP in comparison to other free trade agreements

At a total GDP of USD 25.4 trillion or around 30% of global GDP, RCEP is significantly larger than other free trade agreements. Compared to the European Union, the RCEP covers a significantly larger GDP, however, the European Union has a stronger free trade agreement in place which covers all industries in a single market where the RCEP excludes sensitive industries such as agriculture. RCEP is also significantly larger than the Comprehensive and Progressive Agreement for Trans-Pacific Partnership (CPTPP), a free trade agreement between the 11 countries including Australia, Brunei, Canada, Chile, Japan, Malaysia, Mexico, New Zeeland, Peru, Singapore, and Vietnam. The RCEP is however different from the CPTPP as it does not cover some “softer” areas such as labor and environmental standards. 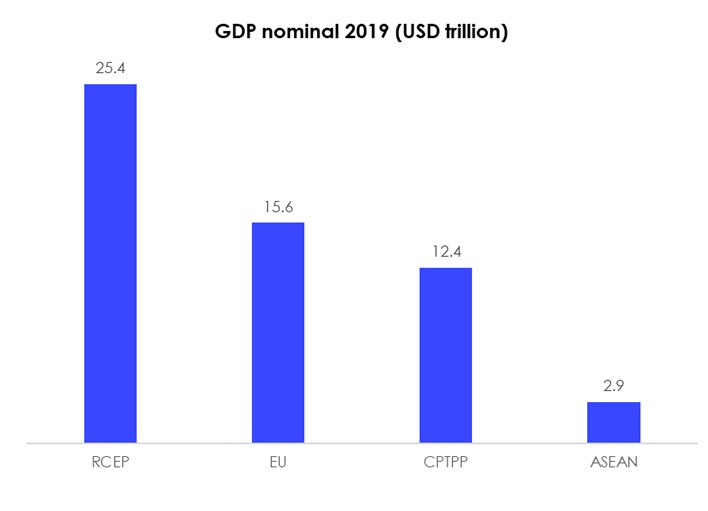 As the dominant member of RCEP, China will be able to increase its ties and strengthen its position as a key trading partner with Japan, South Korea, Australia, New Zeeland, and the Southeast Asian countries. RCEP is also the first time the East Asian economical Powers China, Japan and South Korea enters into the same free trade agreement.

The absence of USA in RCEP further confirms its policy in turning inwards during the presidency of Donald Trump. Under Donald Trump, USA first withdrew from the Trans-Pacific Partnership (TPP) which constituted of the current CPTPP plus USA and with its absence from RCEP, USA is now left outside two free trade agreements that includes some of the fastest growing economies on earth.

For the European Union, the RCEP should function as a wake up call to increase its trade partnerships in Asia. This is increasingly important in a time where many of the economies of the RCEP countries has been less affected by the COVID-19 pandemic compared to the USA and EU. 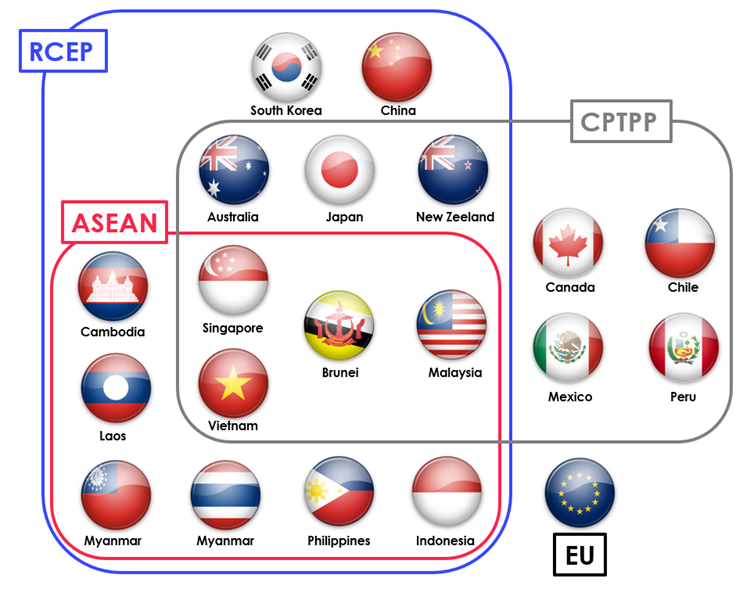 RCEP is the World’s largest free trade agreement that makes up 30% of the world’s population and GDP. RCEP will be a diversified free trade area with member countries ranging from developed OECD countries to population rich fast growing countries. RCEP is significantly larger than other free trade agreements including the EU and CPTPP, but it is not as extensive. Finally, with China as the dominant member and the absence of USA in RCEP, China is continuing to increase its global role in international trade in a time USA is turning inwards.