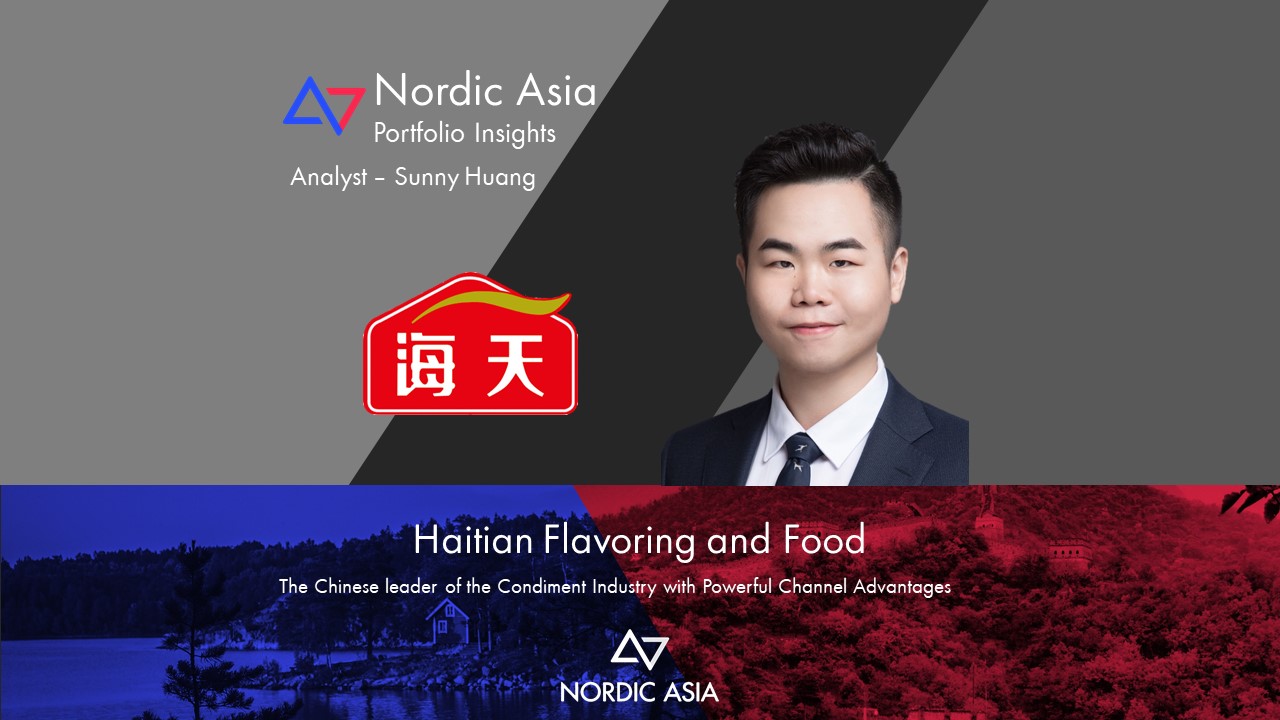 Haitian is the undisputed market leader of the Chinese Condiment Industry. As the market leader, Haitian earns 59% of its 2019 total revenue from selling its traditional soy sauces while revenue from distributing oyster sauces and other sauces contributed 18% and 12% respectively. Among these three sub-categories, Haitian is the absolute market leader in both soy sauces and oyster sauces whereas it is ranked No. 3 in the other sauces category. One of Haitian’s key strategies is to meet the demand from consumption upgrade with product upgrade and product diversification. Another key strategy is to expand its categories to further increase its penetration & market share in the food condiment industry. Haitian’s major competitive edge lies in having the largest group of distributors in the Condiment Industry, covering 100% of China’s prefecture-level cities. Therefore, Haitian could consistently distribute its product nationwide more effectively than its peers. 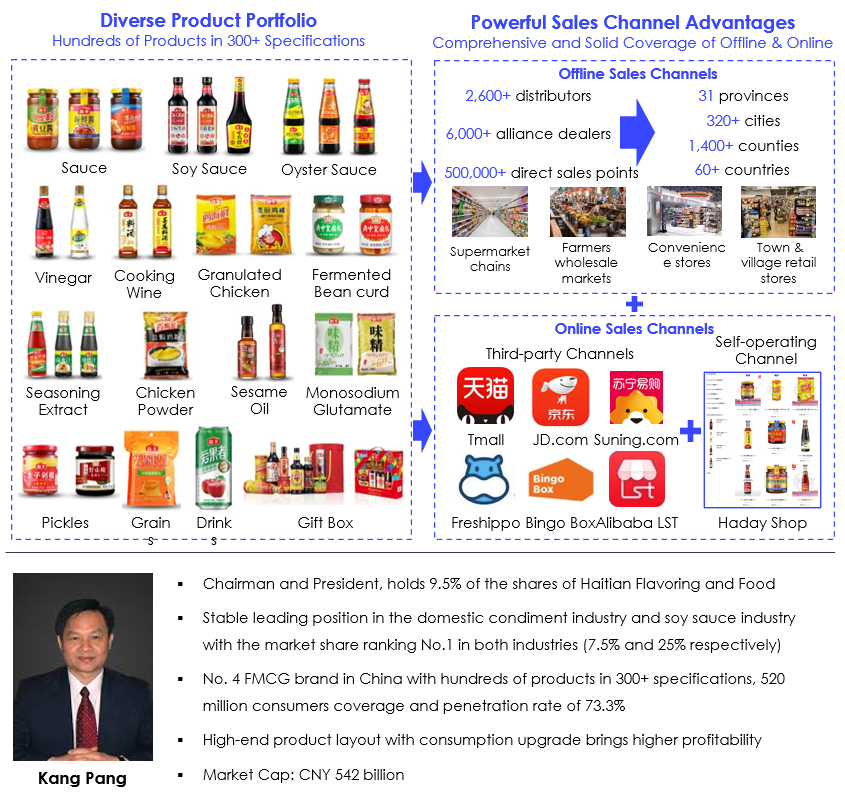 Haitian - Financial Overview as of 14 December 2020 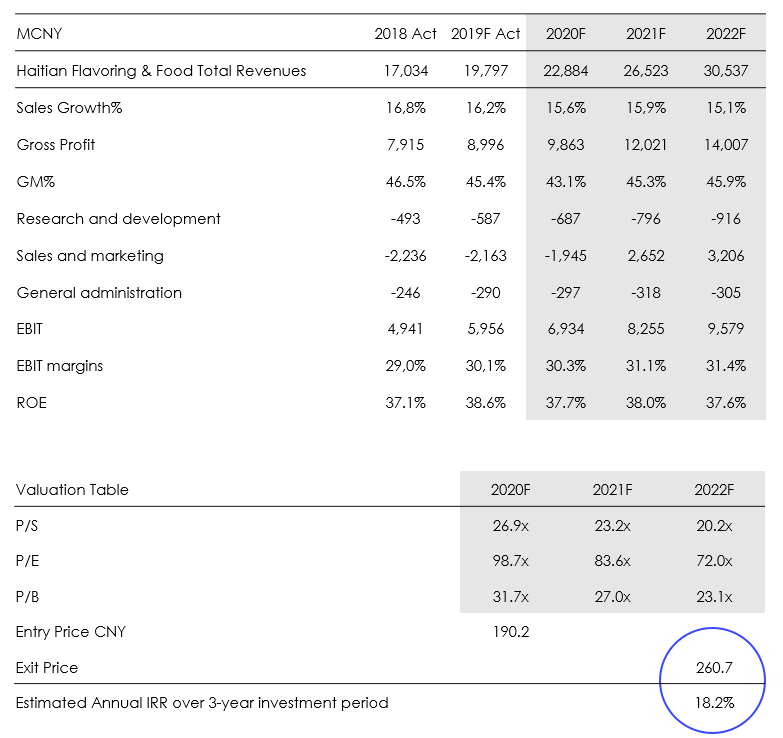 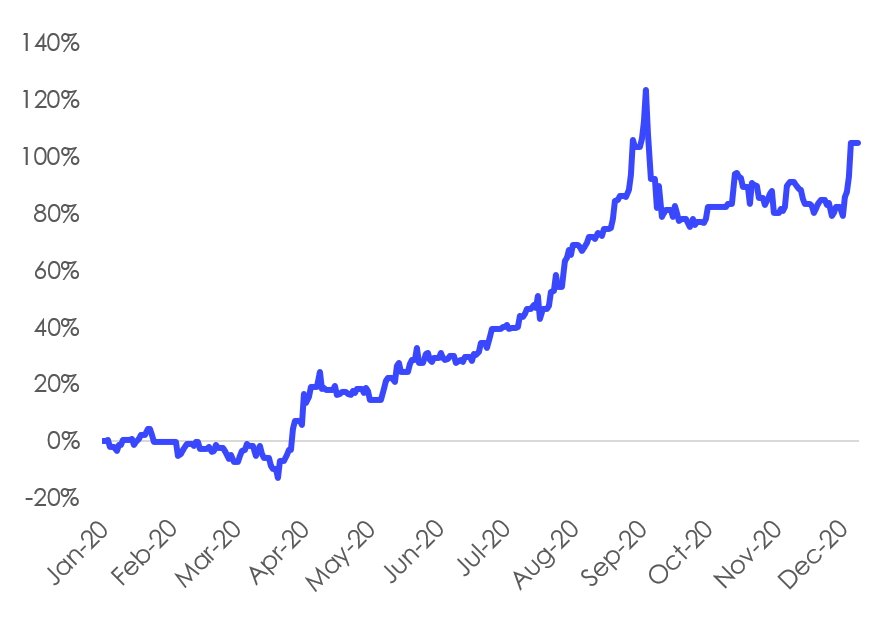 From Nordic Asia’s perspective what is the investment case for Haitian?

China’s food condiment industry reached CNY 419 billion in 2019 with a YoY growth of 8-12% in the past 5 years with a trend to continue to grow steadily as consumer staples. The market is fragmented with a top 4 concentration ratio (CR4) at only 18.6%. Haitian is the largest food condiment company siting at the top tier alone. It is also the largest manufacturer in the soy sauces and the oyster sauces sub-categories. Haitian has a market share of 18% and >50% in soy sauces and oyster sauces, respectively.

Haitian implemented a strategy of product upgrade & diversification + categories expansion to meet the demand from consumption upgrade and increase its penetration and market share in the food condiment industry. With such strategy, Haitian boosts its price by upgrading products with more premium quality and introducing higher-end products. Retail price of the higher-end products could be 2x of the mainstream best sellers. In product diversification, Haitian develops different functionalities, different flavors and better value to boost sales volume. Haitian’s categories expansion enables it to further increase its market share by penetrating other sub-categories. It has developed a product matrix with 100+ types of products or 300+ specifications, with products ranging from soy sauces, oyster sauces, other sauces, vinegar, cooking wine etc. On top of that, Haitian developed 5 signature products with > CNY 2 billion in sales to drive the overall product sale.

Haitian also has the most extensive sales network and the strongest branding power in China. Haitian has 6,739 distributors in its sales network which covers 100% of China’s prefecture-level cities and consistently distributes its product nationwide effectively. About 60% of Haitian’s revenue comes from the catering industry which has a high stickiness to the product and generates stable revenue to Haitian. On the retail channel, Haitian has built a solid consumer perception and strong branding power within soy sauces, oyster sauces, and vinegar.

As a result, an investment in Haitian would give us exposure to a steady industry growth as well as growth from market consolidation as Haitian is the industry leader. 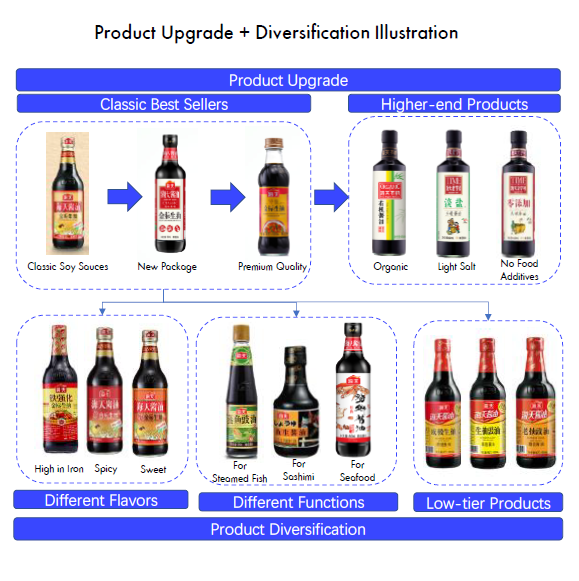 What similarities and differences is there between Haitian and Jonjee HiTech and how do you think the market share in the Soy Sauce Industry between these two companies will change in the future?

Both Haitian and the second listed soy sauce manufacturer Jonjee HiTech are nationwide brands with a product matrix covering similar products. Nonetheless, Haitian is not only the industry leader with s larger market share but also has a more diversified geographic coverage. 45% of Jonjee HiTech’s revenues was generated from southern China while only 21% of Haitian’s revenues was generated from southern China. This difference is mainly due to Jonjee’s smaller sales network coverage with only 1,329 distributors compared to Haitian’s 6,739. Haitian is also more focused on the catering channel while Jonjee is more focusing on the retail channel.

Haitian’s market share in the soy sauce industry is 18% while Jonjee’s market share in the soy sauce industry is standing at 4%. The main reason for Haitian’s dominance is that Haitian has a more advanced production line with a better cost structure. Haitian’s COGS per ton of Soy Sauces was CNY 2,574 per ton which is significantly lower than Jonjee’s CNY 3,562 per ton. Haitian’s productivity is also much higher with Soy Sauces production per production staff at 1,073 tones vs. only 239 tones for Jonjee. As a result, Haitian could consistently generate a higher gross margin with a lower average selling price. Looking ahead, both Haitian’s and Jonjee’s market share will increase due to the fragmented industry while Haitian should enjoy better expansion amid industry consolidation. 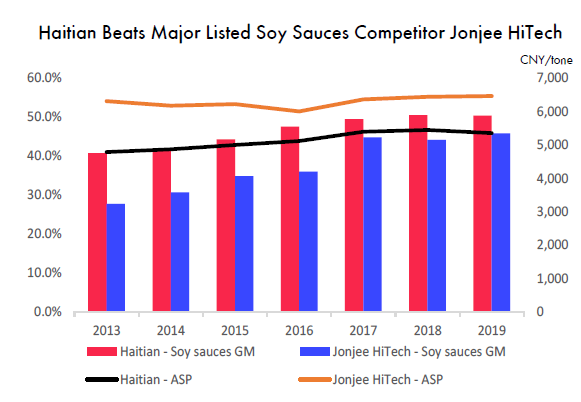 How has Haitian performed during 2020 so far and how was it affected by COVID-19?

Haitian achieved a resilient result amid COVID-19 with 15.3% YoY growth for the first 9 months in 2020. Core EBIT grew strongly by 20.2% YoY. A full year goal of 15% revenue growth is achievable for Haitian. EBIT% improved to 29.8% for the first 9 months in 2020 due to lower costs from a larger scale. The high growth rate is driven partly by the recovery of the catering channel which is expected to continue. Revenue from soy sauces, oyster sauces and other sauces grew steadily by 15.2%, 21.8% and 12.3% respectively in Q3 2020 but declined from Q2 2020 ’s surge from restocking after COVID-19.

Which are the key drivers and challenges for Haitian that we should follow during the coming twelve months?

Looking ahead, Haitian’s continued expansion of its sales network and the recovery of the catering channel will be the main drivers in the coming twelve months. The continued expansion of its sales network will also help Haitian to further increase its market share. The outlook of higher raw material costs could post a threat to the industry while Haitian could counter it with an increase in prices. Haitian also recently launched hotpot products in August 2020. Whether Haitian will be successful in this new category will be monitored.